I Really Just Want a Batgirl Bra: Underthings for the Geeks and Nerds

The words “geek” and “nerd” have become nearly interchangeable in some circles. To avoid some confusion, I present to you a brief “official” definition of each:
A nerd tends to be “a person who is single-minded or accomplished in scientific or technical pursuits but is felt to be socially inept”- i.e. a “book smart”, socially awkward person.
A geek tends to refer more to a person who is not necessarily socially awkward, but who is “generally very knowledgeable—even to the point of obsession—about a topic” – i.e. someone who’s very into a certain TV show or comic book series or game.
Based on these definitions, the underwear in this roundup pretty much fits into the “geeky” category. However, since even some of the companies and sellers themselves describe their products as “nerdy underwear” or “underwear for nerds”, I’m going to basically use the terms somewhat interchangeably in this post.
Also, there are so many things to be geeky about that I can’t possibly try to find underwear that represents everything. Thus, I’m just going to focus on some of the more “mainstream” geekiness. If you have other resources to add, by all means leave a comment!

Today, I wanted to talk about the combination of two subjects close to my heart – lingerie and nerdiness.

If you’ve ever tried looking, you know it’s very difficult to find “nerdy” or “geeky” lingerie, especially outside of the very limited range of mainstream sizes. And the geeky underthings I do come across are disproportionally marketed for (and towards) males. Selection in terms of subject and type of lingerie is also limited; I don’t know of any nerdy-patterned bras (outside of a very small size range, at least). In a way, it’s understandable; there’s really not a huge market for Batgirl bra-and-panty sets in 28H (much to my chagrin). Brands are already taking somewhat of a risk by making non-mainstream sizes; unusual prints have a definite risk of not selling well (although there were many who were enchanted by Freya’s quirky Hello Dolly set, and Ewa Michalak’s upcoming “Newsprint” set has generated a lot of buzz).

I definitely wish we’d see more fun/unusual/nerdy prints on bras specifically. I like to wear fun and quirky things as well as pretty and frilly things or practical things. That said, there are a number of other geeky lingerie-related items – knickers/panties, garter belts, garters, babydolls, etc. – out there if you know where to look. Here are some of the sources I’ve come across. Happy hunting!

ThinkGeek
Along with its underwear offerings for guys, ThinkGeek does have several options for the ladies – Batgirl, various Superheroine packs, Big Bang Theory, Adventure Time, and Portal panties. Most options come in sizes Small (waist 26″) to XL (waist 35″).

Since I was in need of sleep shorts, I decided to snag a pack of Star Trek Boxer Briefs during my last ThinkGeek order. I chose a size Small since the size chart indicated it was for “28-30 inch waists” (my waist is in the 26-27″ range).

However, they ended up being snug for me, and I realized that I had foolishly neglected to take into account that the measurements given assume a small waist/hip difference (i.e. a typical male body). While my waist is around 27″, my lower waist/upper hip where I would wear the waistband of the boxers is 34″. My husband, who wears Medium boxers (typically for waist sizes 30-32″), has a 31″ waist and a 35″ lower waist/upper hip. Basically, I figured out that menswear assumes up to around a 4 inch difference between waist/hip, and since I have a 7-8″ difference, I should’ve stuck with a Medium (which assumes an upper hip size of about 34-38″), especially since I wanted them a little loose. At least I learned something!

All that said, the boxer briefs are definitely fun and comfortable, and they’re stretchy enough for me to probably just wear. 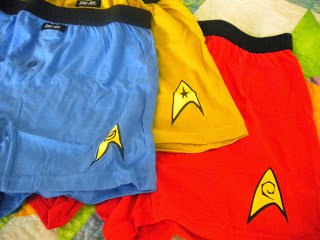 BunnyJump
Based out of the UK with its beginnings on Etsy, BunnyJump stocks a bunch of cute and amazingly awesome handmade underwear encompassing a wide variety of geeky interests. BunnyJump has definitely made my “must try out” list. Seriously want!

SuperheroStuff
This store has (you guessed it) a number of superhero-related undies, camis/bodysuits, PJ’s, and stockings. Mostly casual stuff, and some of it’s found on ThinkGeek, but it’s nice to see a good variety on a specific “subject” all in one place.

YellowIbis
Mostly a science t-shirt site, but for the science/math geeks among us, there are a few underwear options, such as Pi symbol boyshorts and Estrogen panties.

J!nx
Amongst its other geeky clothing offerings, Jinx has a couple of  cute panty options.

Fashionably Geek
The site isn’t a store, but posts feature various geeky underwear pieces with a link on where to purchase at the end. A good source for discovering new things and places to check out!

If you’re looking for more variety of options for geeky underthings and/or more size options, Etsy is a good place to check. A few shops I’ve come across*:

NerdsWithVaginas – on the racier side of things. Basic panties with a mix of naughty quotes from and referencing Harry Potter, LOTR, The Princess Bride, Star Trek, and more. Also, lots of hair bows/bowties (bowties are cool).

UniquelyYoursBridal – lots of pretty custom nerdy garters, including superhero and Doctor Who themed.

EvangelinasCloset – a wide variety of geeky things, including babywear and jewelry, but also some basic panties (mostly Doctor Who, Harry Potter, Supernatural)

DisturbinglyAdorable – a few Zelda panties can be found here!

In addition to the above sites, you can check out stores with “novelty” items like Hot Topic; occasionally you can also find basic superhero panties at places like Target or department stores.
(Edit: I just came across Scarlet’sLetter’s “The Geeky Fan Girl’s Guide to Lingerie” series – check out her roundup for more geeky stuff!)

What do you think of “nerdy” or “geeky” underthings? Do you think there’s a market for them? Would you wear them?

What kinds of things would you want to see sold? Do you feel your tastes are well represented in the lingerie market?

A bit of a news addendum:
This post also seems like a good time to mention that I decided to make my Amazon Wishlist public a little while back. If you feel so led, you can now contribute to blog content by picking out something from it for me to potentially review! This will allow me to review things I otherwise may not be able to afford due to limited funds. In conjunction to the wishlist, it’s possible I may also introduce a “tip jar” in the near future for anyone who feels like contributing towards a specific item for review purposes (especially for things that can’t be purchased directly through Amazon).
I also wanted to make it clear that my making these options available is for the purpose of helping support the blog and creating more content for readers – there’s absolutely no pressure to contribute anything, and I’ll keep any links low-profile (the Amazon Wishlist link is currently only on the About page). In the end, I’m blogging because I love all the aspects of it – writing, sharing my thoughts, helping others, being involved in the lingerie world. I hope this blog has been and continues to be a useful resource for readers, because I love you guys, seriously. *bra hugs*