FussyBusty started the theme “Fit and Active September” earlier this month, and several other bloggers have joined in. I’m a little late to the party as I hurt my shoulder and haven’t been able to focus on my exercise goals as much as I’d like this month, but I wanted to contribute!

Last month, Large Cup Lingerie kindly offered to send me a Panache Sport Bra to try out, and I felt that a sports bra review would fit in well with the theme (see blog policy). Sports bras are a vital part of every bra-wardrobe; my workouts are so much more effective and comfortable when I have the right support.

The Panache Sport is a moulded underwire bra and comes in a variety of colors, including some seasonal ones. Since I’d heard that the cups of the Panache Sport tended to run roomy, I decided to go for the 28GG (rather than my usual 28H) in the Pink colorway. The pink I chose is a nice bright shade – honestly, it makes working out more fun.

The band of my 28GG stretches to 28″, so I found it to be true to size. As a “small 28 band”, I prefer to wear it on the loosest or middle hook. I’ve read that the Pink colorway tends to run a little looser in the band than other colorways, so those preferring a very firm band may want to check into other colors. I’m guessing I’d find some other colorways slightly more supportive.

The cups of the 28GG seemed like a good fit for me, confirming that the bra tends to run roomy in the cups. “Forgiving” may be a better word, as I think that the bra could work well for someone in a small variety of sizes (for example, I probably could also make both a 28H and a 28G work). Because of this, I wouldn’t rule out trying this bra even if you wear above the H-cup size limit. 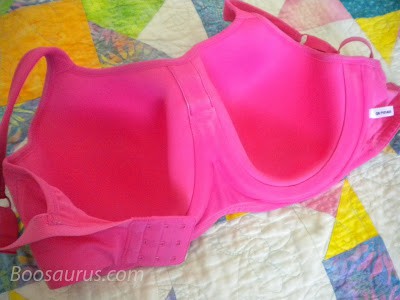 In the above picture, you can see where the wires end in the center channel; they only go a little over halfway up, a fact that I appreciated. No high, pokey, strangling underwires! The top edge of the bra also doesn’t go super high up on the chest, so you don’t have to worry about wearing a shirt with a high neckline in order to cover it. Honestly, though, this bra is so cute that I wouldn’t mind if it showed under a tank top while working out. 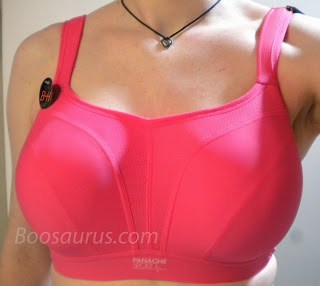 I’m really happy with the shape and look of this bra. It doesn’t create a “monoboob” look, and I actually feel comfortable wearing it on its own without an additional top when working out. Also, it’s a lot easier to put on than a “pullover” sports bra (not practical for me) or a compression “vest-bra” like the Enell. I also found it surprisingly comfortable – so much so that I’ve worn it the rest of the day after a workout. It could certainly double as an everyday bra, especially since it doesn’t really give the typical “I’m a Sports Bra!” look underneath shirts.

In terms of shape, I think that those who have shallow-shaped or top-heavy breasts will have some difficulty finding a good fit in this bra due to the moulded cups and more closed top edge. I found the wires about average, not particularly narrow or wide.

One of the only caveats I have with this bra is that I have experienced some shoulder pain from the straps at times, particularly when I tried the J-hook feature. In fact, I only lasted a few minutes into a workout before having to switch the straps from racerback back to regular. I know that some other reviewers really prefer to wear the straps racerback, but for me, it just didn’t work – you can see that I had to have the straps lengthened all the way to do this, and I couldn’t fasten the J-hook without help.

I feel that the Panache Sport, for me, is at its best when used for lesser-impact sports. I generally wear it while playing Just Dance at home [edit: I’ve since used it during yoga and found it very effective], and while I definitely feel supported in the Panache Sport, I think that it may not be quite as super-supportive as I might prefer with a very strenuous workout or activity (like horseback riding, distance running, high-impact sports). Still, I was quite pleased with the amount of support I got in general, and I’d certainly recommend the Panache Sport as a very solid choice. I’ll definitely be getting a lot of use out of it, and I’m already casting a longing eye on other colorways!

Have you tried out the Panache Sport bra? What do you look for in a sports bra?