Bras I Hate tried this dress recently as well with good results. Since she thought the 36oo/ooo was a little roomy for her and she wears a few cup sizes larger than I do, I decided to try the 36o/oo size in the dress. 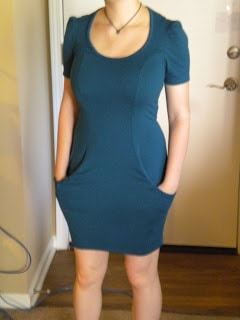 From the front, it looks pretty good. Like the Francuski shirt, it’s a thicker material, has some stretch to it (and is fairly clingy), and feels quite comfy. 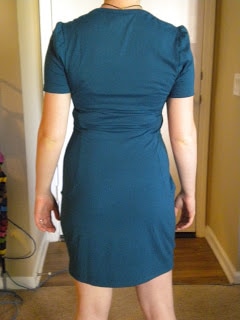 …However, the back gives me the same problem that I got with the Francuski, but in a much more pronounced way – it wrinkles up quite a bit at my narrowest point. Some knowledgeable blogging friends pointed out that the wrinkling issue I get is most probably due to a few things:

-My body type. As mentioned before, I have a sharp curve to my back, a short torso, a broader upper back/shoulders, and higher-set/wider hips. All of these factors combined make it so I tend to get extra fabric in this space in my back – in particular, there’s more fabric here than torso, and the fabric also gets “caught up” in my waist because my hips flare out so suddenly.

-The dress itself. It’s simply made for someone with a slightly narrower overall frame, less extreme instant-hipcurve, and perhaps slightly longer torso than I have. The consensus among knowledgeable friends was that it was most likely a body-type issue rather than a sizing issue (i.e. wearing the dress in a larger size wouldn’t really fix all the issues, and would make the dress too large overall). The dress is maybe slightly tight on my bust and right below my waist, but much of the wrinkling problem goes away when I “fix” the short/very curved torso issue by lengthening out the curve of my torso by raising my arms: 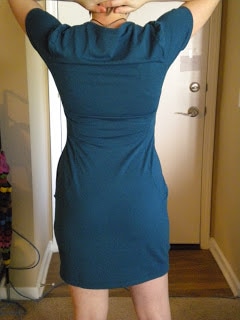 It’s really a pity that the dress just doesn’t seem to be made for me. 🙁 I do love the side profile it gives me: 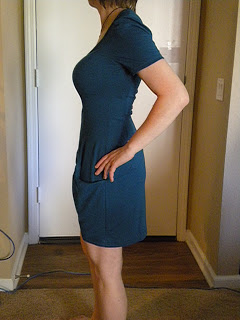 You can still see the wrinkling that I get in the back of the dress, though. Bras I Hate pointed out that in the pictures of her wearing the same dress in a 36oo/ooo, you can see how much more gradually her back curves as compared to my sudden, sharp curve, so even though she does get a bit of wrinkling in the back of the dress (perhaps just because of the way the dress is), it’s much less noticeable on her torso (which, while probably longer than mine, she still describes as short). She also pointed out that my hips/bum stick out more, which also affects the fit; while the dress hangs about evenly front and back from the legs on her, the bottom of the dress is clinging to my legs in front and sticking out in back instead on me (rather than being 50/50 hanging in front and back of legs).

I’m still deciding if I want to keep the dress. I like the shape and it’s definitely comfy, but it’s just not as well suited for my body type as it would be for most others. If you’re considering the dress, I would say give it a go! Who could resist those pockets? 😉
[ETA: I ended up passing along the dress to Muscular Hourglass, and it worked out much better for her!]