Have you heard of new lingerie brand Tutti Rouge yet? Their designs are fun, flirty, and girly without being overly “cutsey”. 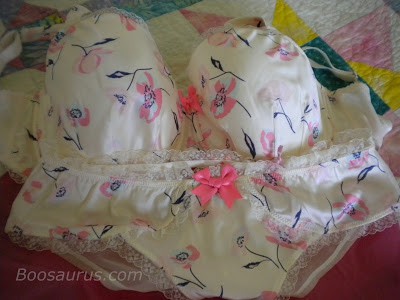 The bra set itself is lovely. I’m generally not one for frilliness, floral bras or wearing bra sets in general – but I was enchanted by the Betty! The little details are unexpected and charming. 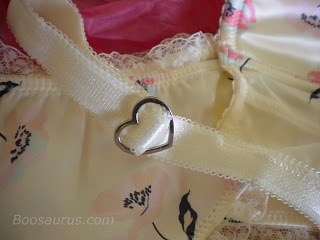 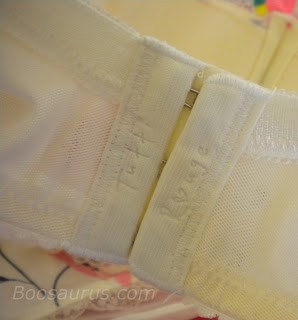 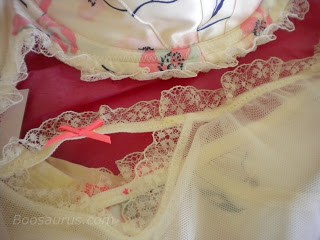 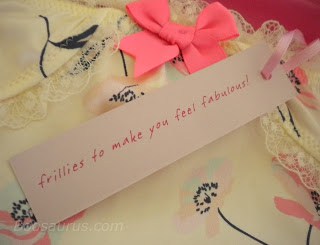 (seriously, how cute is this set??)

I was sent a 30H and Small knickers to try out. My usual bra size is 28H or HH, but I’m glad I went for a 30H in this bra as the band was quite snug (a first for me in a 30 band)! In fact, the stretched-out band measurement of the band is barely 28″, making the fit more like a very snug 28 or looser 26 band rather than a true 30 band. This is perfect for me as I generally need a firm 28 band, but it would mean that someone who needed a true 30 band would need to size up.

However, I will say that there have been some discrepancies on how other reviewers have found the bands of the Betty bra to run. I personally found it quite tight, but others have found it fairly forgiving. I’m left to wonder if it’s perhaps a manufacturing issue as the particular line is so new, or if the smaller band sizes run snug while the higher band sizes run looser, or if breast shape/body type affects the fit quite a bit? Either way, I’m almost wondering if Tutti Rouge might even look into introducing 26 bands in at least one of their lines (as in, rather than producing very tight 28 bands, relabeling them as true 26 bands)… one can only hope!

I found the knickers in my usual size of Small to be roomy; I would do best in an Extra-Small in this particular pair. They were so comfy, though, that I may end up just wearing them anyhow!

The Betty bra itself has a very interesting and unusual shape. The wires are sort of a “tall U’ shape, although I didn’t find them to be pokey under the arms at all. The shape of the wires and cups is reminiscent of the Curvy Kate Tease Me, although the Tutti Rouge Betty cups aren’t quite as shallow looking, but “taller”:

Upon trying on the bra, I found the material to be very comfortable, and the overall fit was better than I expected given that I rarely get along with 30 bands or cups that are at all “shallow” shaped. There were a few issues for me, though – I was getting a bit of spillage at the top of the cups and under my armpits (the cups seemed to be sort of smashing my breasts down and up), the center gore tacked at the top of my sternum but not quite at the bottom, and the bra gave a rather spread-out, minimizing (even flattening) look from both the front and side. This “minimizing” shape is especially apparent underneath clothes. It’s a bit hard to describe, so I took a comparison picture with the Freya Deco (one of my everyday bras, representative of the shape I generally get under clothes): 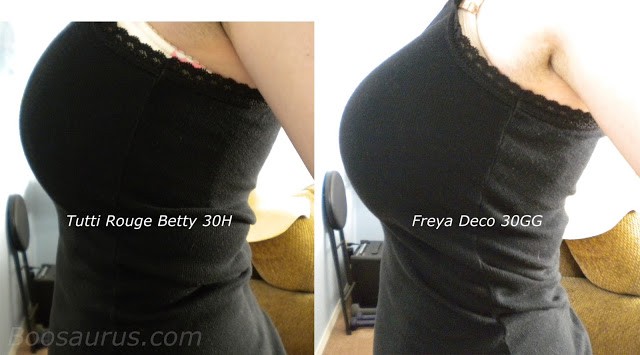 I wouldn’t say that the bra gives a bad shape, but it certainly is different (and a bit unexpected). I’m wondering if perhaps the bra would allow me to wear button-down shirts that were previously unwearable for me due to my bust – an intriguing thought!

I’ve seen some reviews where the reviewer didn’t get on with the shape at all, but for me and my shape (somewhat bottom-heavy), the bra is, if not perfect, at least wearable. Based on my experience with the lovely Betty, I would recommend her for those looking for a more minimizing look under shirts, and for smaller-banded women looking for 28-30 bands that run tight. The bra won’t work for all breast shapes, but for others, it’s a lovely choice.

Looking to give Betty a whirl? You can find Tutti Rouge in stock at Bravissimo.com.