With my recent success with Urkye, I was eager to finally try out BiuBiu, another Polish, bust-friendly clothing company that’s well-known in the bra blogging world. When I saw that there was free shipping to the U.S. on July 4th, I jumped at the chance and grabbed two tops that were on sale. I received the package just about 2 weeks after ordering.

Now, first off, I noticed that the two shirts I ordered were made from a different material than that of the clothing I have from Urkye. These BiuBiu shirts are made of a 95% Viscose/5% Spandex blend. The lightness and stretchiness is nice, but to be honest, the smell and feel reminds me of a swimsuit. Not exactly preferable to me, but obviously everyone has different materials that they’ll prefer [note: the smell faded quickly – I’m just very sensitive to smells/scents :B]. On to the reviews!

The first top I chose was the Emerald in 36BB/BBB.
The shirt wasn’t a bad shape on me, and looked very similar on the model as it did on me. Honestly, though, it wasn’t my absolute favorite. The color is quite a bit greener than shows in pictures – not a bad thing, but I think it’s easier for me to wear blue in terms of finding things to pair with it. I also felt like the bust seemed a little small on me. Or maybe it was just that the black lines on the side gave the illusion that the fabric was straining more than it should?

I think I’ll keep the shirt, and the fit is good enough, but it doesn’t seem as versatile of a shirt as I was hoping, and not necessarily “me”.
[ETA – Okay, I wanted to add that after throwing on this shirt with a pair of khakis for an interview, I have to say that it really did end up working well for me. Actually, I’m kind of more in love with it now. The only slight issue I still have is that it seems just a tad small in the bust for me… but it’s definitely a near-perfect fit. It’s great to have your mind changed sometimes!]

The second shirt I picked out was the Prado Verde, also in 36BB/BBB.

I loved the print of this shirt, so I snatched it up. Unfortunately, I failed to notice that the bust seam hits at a rather strange point – it sits on the bust rather than underneath it. I feel this gives the illusion that the bust part of the shirt is too small for me (it looks like the seam should be sitting under the bust, but isn’t). I already get this “too-small-in-the-bust” look on shirts that I can buy at any department store, so I wasn’t too happy that I had missed seeing that for this top.
Also, the shirt makes me look pretty boxy from the front and back, and makes my shoulders look even broader. This is just a case of the shirt not suiting my body type, I think. :/
I really wanted to like this shirt because of the print and because it was really quite comfortable and light-feeling (despite the swimsuit smell). A friend suggested pairing it with a long skirt and belt rather than shorts, so I cobbled together something from my closet for a comparison: 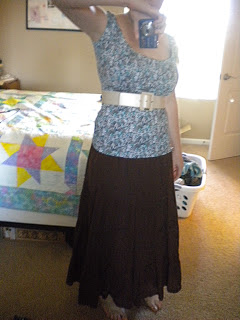 A bit better, but the shirt gave a pretty boxy look from the front still, and I feel I shouldn’t have to wear a belt with a shirt that’s supposed to be tailored to a busty body type anyway. I’m fairly sure this one’s going to be passed on or returned.

So, concluding thoughts? With all the great things I’ve heard and seen about BiuBiu, I wasn’t as impressed with these two shirts that I chose. They just didn’t seem quite as bust-friendly as I was expecting them to be. I also wish I’d been a little more careful and thorough when I chose the tops, but then again, I didn’t see a whole lot that really jumped out at me on the site that was stocked in my size.

I do want to add that I am by no means bashing or dismissing BiuBiu. They’ve really pioneered an awesome site and clothing line for bustier women like me. Their clothing is very affordable, even considering the cost of shipping from Poland. There are quite a range of shapes and patterns available. And I’ve seen other women wearing their stuff, and it looks amazing on them. So, I do plan to try BiuBiu again sometime in the near future – and I’ll cross my fingers that I make better picks!