Enell, You Make Me Feel Supported

This is the story of the second sports bra that I’ve ever owned in my life.

But, you say, you’ve always been a fairly athletic girl, right? What is this “only ever owned two sports bras” nonsense?

Ah, my friends, the tale of the first sports bra is indeed one of woe, the centerpiece of the tale being a stretchy “36D” sports bra that I acquired at around age 15. Alas, it offered but little support and did nothing but grant me the gift of uniboob, and I gave up hope of ever finding a sports bra that would offer me any support.

However, (thankfully) the story does not end there. In somewhat more recent history (after discovering correct bra sizing), I decided to venture once more into the somewhat enigmatic world of sports bras, and I acquired a very slightly used Enell sports bra. My verdict and some notes, based off a few years worth of testing, are as follows:

Looks
-The bra is wire free, and it’s front-closure by means of 11 hooks. I found this to be rather a pain at first, until I noticed that the instructions on the website recommend hooking it from the bottom up, adjusting as you go. Much easier this way, trust me. However, it isn’t a bra that you’ll be able to just throw on in a matter of mere seconds. I do think it’s nice not having to hook it around the back (like most sports bras) or wrestle on a bra with no hooks, however.

-This is not a “small” or “cute” bra – it’s almost like a small vest – and if you wear any sort of tank top, the bra will probably peek out of your shirt. This isn’t too big of a deal for me, however. Also, there are seams in the front of the bra that will show up under most, if not all, fabrics. Again, this doesn’t bother me too much, but it’s something to be aware of. The shape it gives is a rather compact/flattened shape, but I didn’t find it too extremely “one-boob”, and I appreciated that it didn’t give a weird pointy look (Freya Active, I’m looking at you). 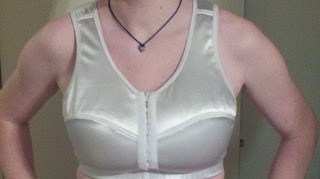 Sizing
-Enell uses its own sizing system for the bra (from sizes 00-8) rather than using regular bra sizes, a big plus for me as I’m sized out of many sports bras anyway. There is a handy size chart on Enell’s website that lets you estimate what size to get (go off your measurements, not the listed bra sizes). Not everyone will fit exactly into one size – for example, according to the chart, I would be a 00 based on my underbust and a 0 or 1 based on my bust. The bra I own is actually a size 1, and I find that it’s still supportive enough, although it looks slightly loose in some areas on me (on the sides and a little on the straps). Overall, it seems that getting a size that’s “close enough” will still work for the most part.
A note – the website does say that they do custom orders, which I would probably have to do if I wanted one that fit perfectly.

-Like most good sports bras, the Enell feels quite tight in the band, especially at first. If you’re not sure what size to get because you’re between band sizes, I would go with the larger one, but the tightness may just take some getting used to.

Comfort/Support
-After getting used to the bra, I found that I was able to wear the bra around for the rest of the day without feeling like I had to immediately change into something more comfortable. (Bonus: it makes my bust smaller by about 2 inches, so I fit into shirts better! :P) This may be because it’s slightly big for me, so I don’t know if this would be as much the case if I was wearing a size smaller. I’m not saying it’s an everyday bra, but it’s not a “wear it only as long as you absolutely have to” bra either.

-The bra makes me feel very supported. The main thing I’ve ended up wearing it for has been Zumba classes (dance aerobics), and the difference between wearing the Enell vs. any other regular bra or old sports bra has been incredible. All that dancing and jumping is seriously so much more comfortable when you’re wearing a great supportive bra.

End verdict? I appreciate Enell’s sizing system (based on measurements) and the availability of custom-sized bras. Even in a slightly incorrect size, I found it supportive enough and pretty comfortable. If you haven’t yet found a sports bra that works for you, then Enell is definitely worth a try.

Since this is the only sports bra I’ve had that really works, I’m always curious about others’ experiences with them. What are your feelings on sports bras? Has anyone tried out the offerings of Panache or Freya, or the much-praised Shock Absorber?