You may have measured yourself to figure out an approximate correct size, but how do you know if a bra you’re trying on (or the one you’re wearing now) is a good fit? If you notice one or more of these five common signs of a poor fit, then it’s time to try a different size!

1. The straps are digging into your shoulders, leaving grooves and marks.
Most of the support that the bra gives should be from the band of the bra – very little weight should be on the shoulders. Straps digging in to your shoulders indicate that too much weight is being placed there. This can cause discomfort, pain, slouching, and marks/shoulder grooves (that can even become permanent)! 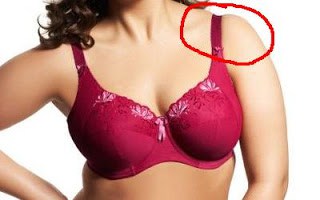 Solution:
If you have straps digging in and leaving marks, this probably indicates that the band of the bra isn’t tight enough to give support. Go down a band size (and up a cup size for each band size) until the band is firm and supportive and you can just fit two fingers under it. 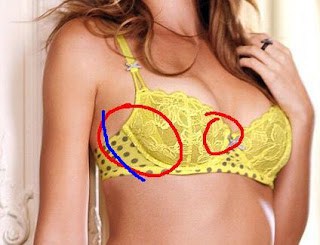 Here the wires aren’t going far back enough to encase all of the breast tissue – the wire would have to extend back to about the blue line to do so. There’s some spillage going on in front, and the front wire is also sitting on the breast rather than fully encasing it and resting against the sternum. 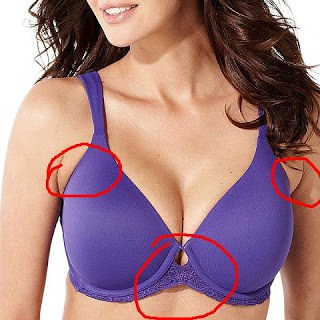 The wires of this bra are very obviously sitting on top of the breasts and not against the ribcage at all. There’s a lot of bulging out of the cup happening under the armpits. If we could see the side of the bra, the wire would most likely be sitting on the breast tissue there as well. The cups are much too small for this model – if the front wires were sitting under the breasts as they should be, about half of the breast tissue would be bulging out the top of the cups!

Solution:
If wires are sitting on your breasts, go up as many cup sizes as needed in order get the wires sitting comfortably against your ribcage and have the breast tissue fully encased. 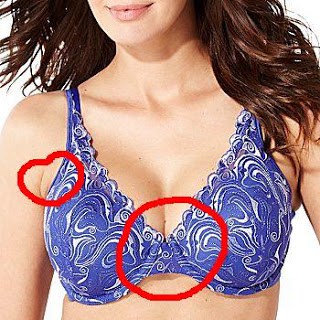 In the picture, you can see that not only is the center gore pushed far away from the sternum because of the too-small cups, the model’s breast tissue is spilling out under the armpit, too! (Here’s yet another example *tsks at Playtex*)

Solution:
Go up in cup size (and down in back size if necessary) until the center gore sits completely against the sternum and no wires are resting on any breast tissue.

4. The band is riding up in the back (or is sitting too low)
This is one of the most common problems women have – a too-big band and too-small cups. The band riding up in the back (or sitting too low on the back) indicates that the breasts are not supported by the bra – the bra is functioning more like a sling rather than giving firm support for the breasts. The band of a new bra should be sitting straight and firm across the back on the loosest hook.
Other indicators of a too-big band are if you can fit more than a couple of fingers under it, or if you’re always having to hook the bra on the tightest hook. 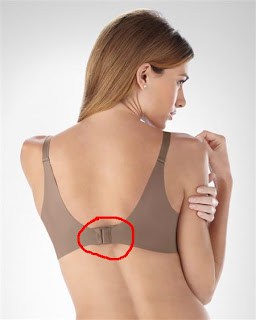 The band here is riding up (rather than being firm and straight across the back), and it’s also on the tightest hook – both strong indicators of a too-large band. 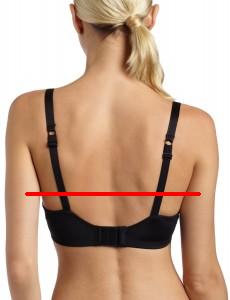 The band here is sitting too low – the top of the band should be up about where the red line is instead.

Solution:
Go down in back size (and up a cup size each time) until the band sits firmly across your back. You may find need to go up additional cup sizes as well at the end, as it’s difficult to see how well the cups are fitting if the band is much too large. For example, when I got properly fitted for the first time, I went from a 36DD to a 30G (a 36DD cup volume is roughly equal to 34E, 32F, and 30FF, so I went up an additional cup size once the band size was correct).

5. Your boobs are bulging out of the cups, creating the “quad-boob” (or four-boob) effect.
This may also mean that the wires are sitting on breast tissue (see #2). Boobs bulging out of the top of the cup indicate that the cup is too small. There’s nothing wrong with some cleavage, but it should be a smooth line that the bra creates, not bulging. 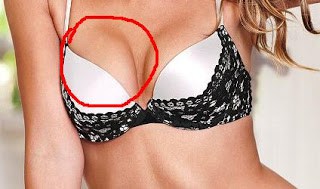 It’s a bit hard to see (most likely due to Photoshop smoothing), but you can still tell that the breasts are bulging out of the cups, which are cutting into the breasts.

Solution:
Go up in cup size until you no longer get bulging out of the bra.