Greetings, lovely readers! My lack of online presence and my sporadic posting may be partially explained by the fact that I was gone for most of May on a trip to the UK. Although I didn’t get much time to do lingerie shopping (a quick stop in a Bravissimo was about the extent of it), I had a great time as Mr. Boosaurus and I celebrated our 5th wedding anniversary and visited some relatives. 🙂

After a rather disastrous experience with lugging a heavy, unwieldy duffel bag around on a 2011 overseas trip, I resolved to pack as light as possible for this trip. Our goal was to limit ourselves to carry-on luggage – that meant one “larger” bag each that met carry-on requirements, plus one “personal” bag each (a messenger bag for him, a small purse for me). Since we were going to be gone for a total of 17 days, this task seemed a bit daunting. However, with some planning and strategic purchases, we were able to accomplish our goal!

As just a brief rundown of some of the things we did to help us pack light:

-We invested in a Convertible and a Voyageur pack from MEI Packs, a small company that custom makes their pieces. We found the packs durable, well-suited to our needs, and a great value. The ordering process (through email/Paypal) was straightforward and we received our order quickly.

-We brought layers of thinner clothing rather than bulky items. The weather ranged from high 40’s to mid 70’s while we were there, with some wind and rain, so it was important to have clothes that worked for a variety of weather situations. We each included a few sport/active tops that were great for traveling and dried quickly. We also each brought a pair of Convertible pants (stylish!).

-We planned to do laundry, both machine and handwashing, while we were there in order to be able to pack less clothing. To prepare for this, we brought some packets of Woolite soap, a small bottle of Dr. Bronner’s for handwashing, a clothesline, and a sink stopper.

Laundry was really a key part of being able to pack light. One of the main things I was worried about was packing enough pairs of underwear. I knew I did not want to bring 18 pairs of underwear with me, I didn’t want to handwash cotton underwear, and I didn’t want to bring any “delicate” underwear even if it did tend to dry faster. The solution I found was Exofficio’s Give-N-Go underwear, which I found on sale on Amazon for less than $10 a pair (for certain colors and sizes). I decided to take 5 pairs total (wear one, pack 4) and handwash/air dry throughout the trip (some people may have felt comfortable with even fewer pairs, but I didn’t know how often we’d have the opportunity to do laundry). 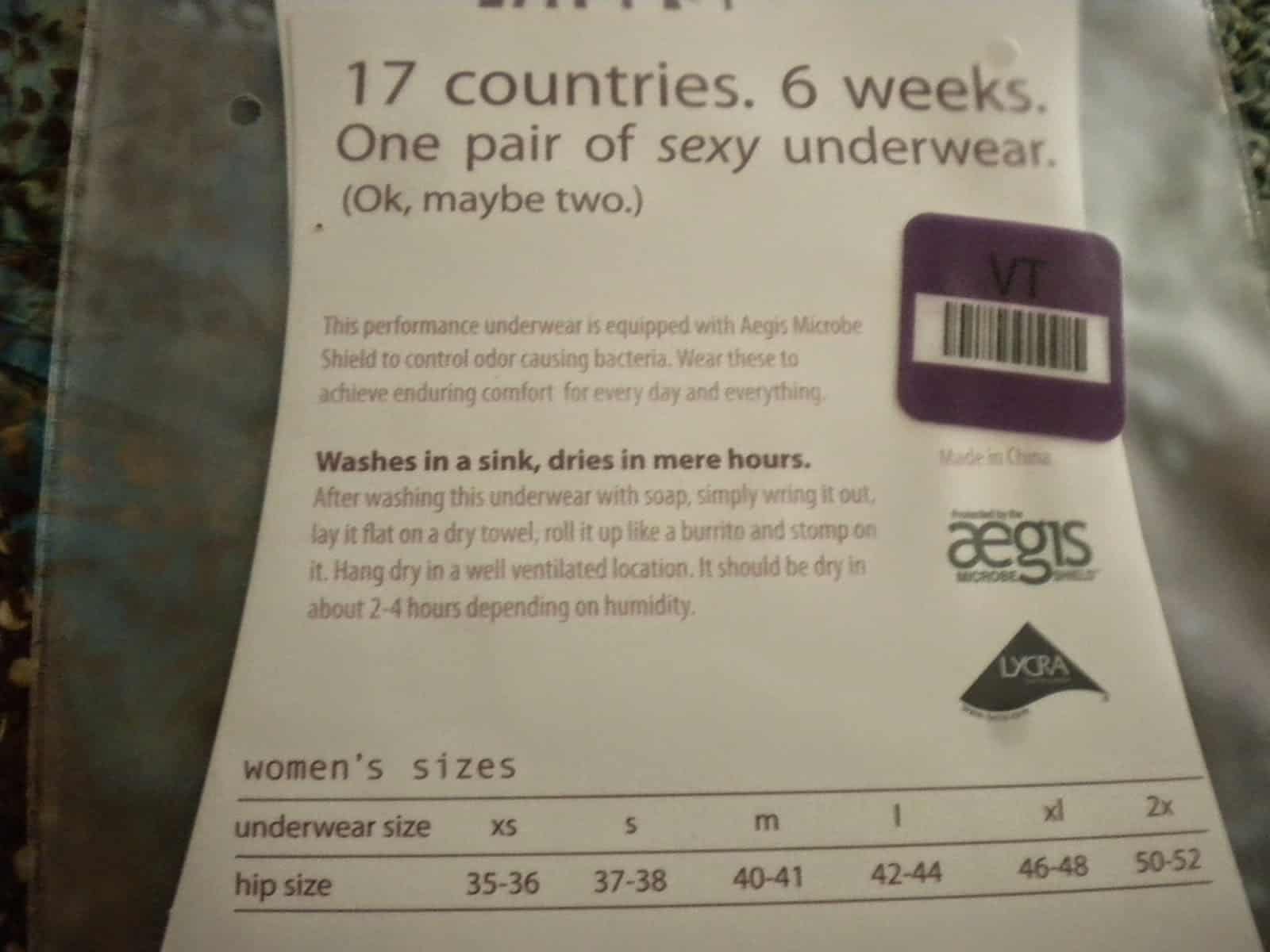 Mr. Boosaurus also wasn’t going to waste space on lots of underthings, and he ended up bringing a total of 3 pairs of boxers for the trip (wear 1, pack 2). Since Exofficio men’s boxers were more expensive at about $25 a pair at our local REI store, he brought 2 Exofficio and 1 “regular” pair. He felt the Exofficio boxers were good for two wears before a wash, so we each had 5 “wears” before needing to do laundry. All in all, we did 3 small loads of machine laundry while traveling, 1 larger handwash ‘load’ in a bathtub, and quite a few small sinkloads (mostly underwear and sometimes an active shirt and socks). We felt that the types and amount of clothing we brought were just about right.

So how did ExOfficio underwear work out for me? I found the undies comfortable and durable while still managing to feel somewhat pretty and delicate. They washed easily and dried quickly (although I found that it was better to plan to dry them overnight rather than hope for them to dry in a few hours’ time – I think you’d need to sun them outdoors for that).

Since my hips are about 36″ I technically would be an XS according to the size chart. However, due to color choices and sales and preferring my underwear not to fit too snugly, I chose 4 Small pairs and one Extra Small pair. I found that they all felt comfortable and well-fitting, so I’d say that you could size up or down fairly easily if you feel you’re between sizes.

The only caveat I have is the same as I saw mentioned in a few of the reviews – the material doesn’t really allow for adhesives to stick, so disposable pads won’t work very well used in conjunction with this underwear. Since I generally use cloth pads and didn’t expect to need pads at all for the trip I wasn’t worried about that aspect, but I ended up having to test this out on the very last day as we were rushing through the airport (of course). No, disposable pads don’t work too well with these, but it worked “well enough” for a short time and I was thankful that most of the day was just spent sitting on an airplane. If you’re traveling and plan to use disposable pads, you probably will want to have a different kind of underwear for at least those days.

In conclusion, if you’re looking to save packing space but don’t know if you’ll have access to a washing machine, don’t want to carry around extra pairs of dirty underwear in your luggage, are looking for a durable and moisture-wicking pair of underwear that isn’t super utilitarian looking and washes/dries easily, and don’t want to spend a fortune, then ExOfficio is probably a good choice for you!