Early last month, Braologie was having a super sale on the updated version of their mini posture vest, the Bracie. The Bracie was created with several things in mind: to help take pressure off the ribcage from bra wires digging in, improve posture, create a smoother line under clothes, and bring the breasts more to the center (as well as create a more “uplifted” look). At the sale price of just $19.99 + free shipping, I decided to finally snatch it up!

I ordered a Size 1, which is the size recommended for ribcages measuring 24-27″ (my underbust measurement is about 27″). My package arrived surprisingly quickly, especially considering the company is based in Hong Kong. A pamphlet is included that gives clear directions on how to wear the Bracie.

The size I ordered measured about 32″ stretched. However, as the Bracie is worn a little lower than the bra band, it’s good to keep in mind that you may need to size up if your ribcage flares out or you’re in between sizes. Although I could fasten the Size 1, I would’ve been interested to try a Size 2, just for comparison. 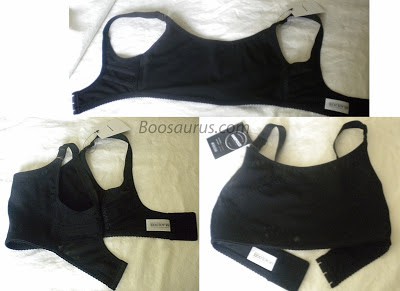 The Bracie adds some support to the breasts by helping lift them from underneath. This can create some extra cleavage, which may be a great bonus for some. I appreciated the fact that I could use the Bracie for this if I so desired. However, I found that the Bracie gave my profile a little bit of an odd look from the side, possibly due to my breast shape. My breasts looked more projected and “centered”, but as the Bracie comes up past the underbust, the band sort of cut in to my breasts and made them spill over the top of the Bracie a little oddly.

So, on to the main question: Did it help with posture? I’ve always struggled with poor posture, exacerbated by years of wearing ill-fitting bras in high school. Thus, I have really been on the lookout for something that serves more as a “gentle reminder” rather than full-on posture vest (which my chiropractors have advised against). The Bracie does provide this bit of a gentle reminder, and also does help a bit with smoothing the back. However, I would have to categorize the posture help I personally get from the Bracie as “very slight”. It’s not nothing, but it’s less than I had hoped. However, I’ve heard accounts from others who say that they definitely noticed that their posture was helped by the Bracie, so this may be a very individual thing.

My main issue with the Bracie – and this was a big one for me – was that the bottom edge of the posture vest where the hooks sat was rough and caused skin irritation. I eventually tried wearing it with an extender to see if this would help the issue. It may have helped a little bit, but it by no means solved the problem. While I realize that I have more sensitive skin than some, this was such that I couldn’t comfortably wear the Bracie for more than a few hours at a time, if that, and I was left with darker red marks that lasted for hours, far longer than the marks usually left by my everyday bras.

I experienced this irritation and marking regardless of whether or not I used an extender, and I don’t believe it had to do with the Bracie being too tight – rather, I think it was a poor design factor that left certain portions of the fabric rough. You can see from the below examples where the main portion that caused the irritation was – on the bottom of the hook portion.

One possible solution to this could’ve been wearing something protective underneath the Bracie, and/or covering the irritation portion with something like moleskin or another fabric, but I felt that this was too much of a hassle and shouldn’t have been necessary. Also, I felt that the irritating portion was a little big to cover easily. I did experiment with sticking a bit of fabric underneath the hooks for a little while, but found it didn’t really help the overall feel.

In summary, here’s my personal pro/con list for the Bracie:

I think the Bracie would be best for those who struggle with bra underwires digging into their ribcage. Since I don’t really have this problem, I didn’t get to experience the benefit of having this relieved by the Bracie, but for those who have this issue (often a problem for those with sub-28 bands combined with J+ cups), the Bracie could become a wardrobe must.