The other week, bust-friendly Polish clothing company Urkye kindly offered to send me one of their newer styles of shirts, the Kopertówka, to try out. As Urkye has been one of my go-to places in terms of shirts for quite a while now, I was thrilled! (note blog policy)

It was mentioned that the Kopertówka tended to run roomy in the bust and I could probably get away with a 36o/oo rather than my usual size of 36oo/ooo, but since I’ve been feeling that the 36’s have been seeming a bit roomy on me in general, I decided to try out a 34oo/ooo this time around.

The Kopertówka comes in a variety of vibrant colors – red, green, lime, purple, and gray. I decided to go with zielona (green).

Unlike previous Urkye offerings, the Kopertówka shirt has an extra layer on the front as well as fabric gathering on one side. At first, I was a little confused about how to adjust the “layers”, and thus ended up with a look that didn’t seem quite right:

But then I took another look at the model on the site and realized how the shirt was supposed to look! A bit of readjusting later:

Much more flattering! The color itself is really nice, as well – it’s a bit deeper than is shown in most of my pictures (the closest would be the one of the shirt on the hanger). I’m thinking I need more green shirts in my life.

I get a very slight bit of the usual gathering from “extra fabric” at the narrowest point of my back due to my shape and curve, but not enough to bother me. 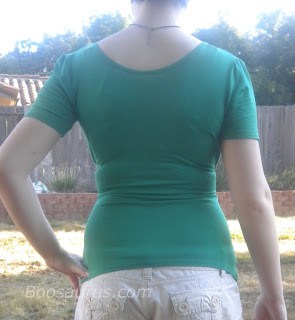 Because the shirt is effectively two layers thick in front, the shirt seems like it would be ideal for the days that are just starting to get a bit chilly. I also found the shirt gave a somewhat more minimizing profile than many other Urkye shirts – see side views:

Although the 34oo/ooo technically fits me and is definitely long enough (I find too-short shirts that ride up especially annoying on me), I think that in general I prefer the looser fit of my usual 36oo/ooo just as a personal preference. Despite that, I’ll definitely be getting a lot of use out of this shirt!

In addition, Urkye is holding a sale (with most items anywhere from 10-40% off) through the end of August, so this week is a great time to try things out! And in mid-September, Urkye is set to come out with a long-sleeved version of the Kopertówka. I’m thinking it’s one I’ll definitely want to be adding to my wardrobe.

What do you think of the Kopertówka?