A few months ago, I contacted The Little Bra Company – a brand that offers a lovely array of bras in the size ranges of 28-38 A, 28-36 B, and 28-34 C – about putting together a review post. They graciously agreed to send an array of sizes and styles for my two reviewers to try out. Both reviewers, “Beth” and “Claire”, had struggled for years with finding bras that fit their petite frames well. In participating in this review, not only did they get a chance to try on some truly lovely bras cut specifically with their frames in mind, they were able to figure out and wear their correct sizes for the first time!

Previously, Beth had worn bras in size 32A but found them to seem too loose; she had never known that smaller band sizes were an option. Of the bras she sampled from The Little Bra Company (TLBC), Beth found that her best fits were those in the range of 30C. In general, she preferred the bras in the mix she tried that did not have a lot of additional padding, as they seemed to cause a “muffin top” effect that did not feel natural to her.

Beth’s favorite bra was the lightly-padded Ethel Midnight Blue in 30C. The tapering straps were supportive, yet comfortable, and she fancied the fact that when she leaned over she felt that her breasts were well contained. The band was comfortable on her sides, and while it was smaller all around than she was accustomed to, the band did not cut into her skin or cause discomfort. 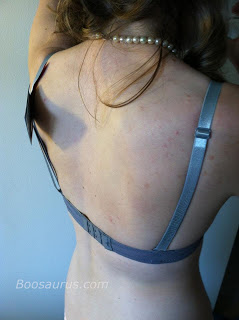 Beth also really loved the feature of the removable pads in the Ethel – she had struggled for years with asymmetrical breasts and was now able to solve the issue by removing one of the pads.

Beth also favored the popular Lucia bra in 30C for its cut and coverage; she appreciated the feel of the bra and natural-looking cleavage that it gave.

The Esther bra stood out to both Beth and Claire for its comfort and pretty details, but both reviewers found it to seem too small in the cup (giving “muffin top cleavage”) in 30C. They both would’ve loved to try this bra in a cup size up had it existed, but it may have been that the style and cleavage this bra gave just wasn’t for them.

The other lovely and intrepid reviewer, Claire, had been wearing a 32B. However, upon trying on the smaller band sizes, she realized how lacking her past size choice had been! Of the bras that Claire sampled, she found that her best fit was tied, depending on the style, between 28C and 30C.

Claire expressed that it was incredible to feel the support of truly well-fitted bra. Previously, she had dealt with being very self-conscious of her more shallow breasts and had never really found a bra that complimented what nature had given her. However, she felt that the Ethel, Erin, and Lucia styles did just that!

Claire loved the color, cut, and cleavage effect she got from the Ethel. Claire seemed to be between sizes in this bra; the 30C cups provided good fit and coverage, but she found that the 28C band fit her well. It seems that a 28D would’ve been her ideal size in this bra. Despite the slight smallness of the cup in the 28C, the Ethel is too lovely to not showcase!

Another bra that Claire liked and found to be a close fit was the Erin in 28C. Claire appreciated the look of the bra and the push-up effect created by the Erin, but she preferred more coverage than the 28C in this bra gave. Claire may have done best in a 28D if the bra had been made in this size.

Claire’s favorite bra overall was the Lucia in 30C. She loved everything about it – from the color to the way that band was supportive yet breathable. She expressed that it was wonderful to wear a “not too padded” bra that still enabled a more natural cleavage to occur. 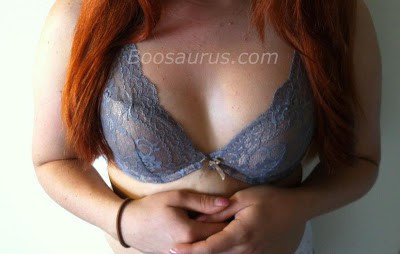 Overall, after the experience of trying on high quality, more tailored bras with elegant detail, Claire, in her own words, “realizes that the right bra can bolster confidence and an appreciation for the body she was born with.”

Many thanks to The Little Bra Company for providing such a great variety of bras for my reviewers to try out, and to Beth and Claire for sharing their thoughts! Even though the bras from TLBC are not in my size range, I was impressed at the quality and loveliness of the various styles. It’s great to see a company dedicated to providing elegant, sexy, “grown up” styles within the petite size ranges that can be very difficult to find (notably 28-30 A-C). Also, I appreciate that there are bra choices available for a range of styles (including multiway and strapless) and various levels of padding.

In regards to sizing of the bras in general, the stretched band measurements on the whole corresponded to the given band size (i.e., a 28C had a band that stretched to 28″). It seemed that the cups of some of the bras ran on the small side, so keep this in mind when ordering (i.e. if you generally wear a 30B, you may find a good fit in a 30C for TLBC in some styles, and vice versa). And while The Little Bra Company isn’t particularly known for having styles that cater to more shallow shapes, there are still a few styles that are worth checking out.

Have you (or anyone you know) ever tried out bras from The Little Bra Company?