Today’s guest post is from fellow bra aficionado Maddie, who recently went to several big-name US stores that offer bra fittings to see what their fitting advice would be like. You can check out Maddie’s Victoria’s Secret experience (as well as VS experiences from other bloggers) at Braless in Brasil!
(For reference, I would generally wear a (UK) 32JJ/K, though I would accept being sized as a 34 because my un-snug underbust measurement is exactly 34. Pulled super-taut, the measurement is 32 or thereabouts, and I’m a bit squishy so 32 usually works for me. I wore a 40DDD around all day for the purpose of feigning ignorance. This good-fit picture is a Cleo Francis 32J, which I do need a cup size up in because I’m getting a little four-boob, but it’s the best fit I have at the moment)
Store #1: Nordstrom. The positive here is this was my best fitting of the day, which I believe is owed to the fact that they measure you without your shirt on, something no one else bothered to do. Another positive is that it was explained to me I should start out on the loosest hook and use the tighter ones after the bra has some wear and it starts to feel looser.
The associate measured me at 34″ underbust, and brought me a bunch of trial size bras in a 36 band, so apparently it’s common practice there to add 2″. Started at a DD or DDD and worked up to a GG until she thought the fit was good. The pink bra is the 36GG she used to size me. Nordstrom fitting is more hands-on than elsewhere that I tried, as they will remain in the fitting room with you unless you say otherwise, and do up your bras for you and adjust the straps. After they were done up though, there was no tugging at the band to see if there was too much give, and you can see how far I can stretch the front and back. 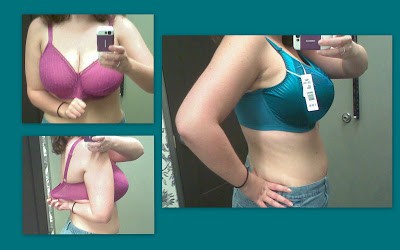 The teal is a 36GG Elomi which she determined to be my best fit. Her manager agreed, despite the fact that I expressed a slight reservation that the band might ride up once I started moving around. Also getting slight side boob, but the cups are an ok fit. I actually might consider this bra if it comes in a smaller band/larger cup as it was quite comfy and I like the color.
Final fit: 36GG (UK)
Store #2: JCPenney. They advertise bra fitting all over their dressing rooms in the lingerie department, but I wandered around there for a few minutes and there was no one to be found. Womp womp.
Final fit: none
Store #3: Macy’s. This was abysmal. Measured over my shirt; when I asked how they determined band size I was told they add 3″. She said I measured 36, so I could go with a 38 or 40 band. Also measured for cup size and was told G. This store only carries US sizes, so a G is more like a UK F.
I was handed these 3 Wacoal bras as pretty much the entire selection they had in my ‘appropriate’ size. Lovely eh? Top row is a 38G US, middle is 38H, I can’t remember what the bottom was…one of those 2 sizes. All manner of bands riding up and drooping boobs, and no center gores touching. They are not really hands-on there so I had to ask the associate to come in and give me her opinion. She thought the 38H was best, but changed my band to the middle hooks, and had me try to scoop my boobs up higher in the bra in hopes that they wouldn’t look so droopy. Obviously that wasn’t working. 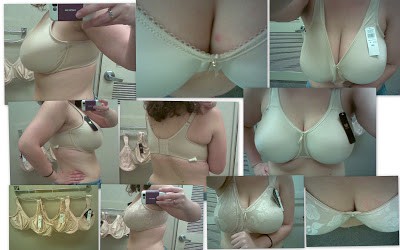 She also basically made fun of sizes like 32G and L cups. She expressed astonishment that such things even existed. She did, however, offer me the names of a couple boutiques, and mentioned Fantasie as a brand that makes larger cups that I may want to check out (thought she had no idea what it was, a customer had mentioned it to her).
Final Fit: 38H (UK size 38FF)
It’s no wonder I’ve pretty much lost faith in US in-store fittings! Have you been fitted or shopped at any of these stores?