Since my size has changed as of late, I’ve been buying a bunch of gently-used, cheap bras from some friends/fellow bra-lovers in order to help determine my exact size in different brands. I recommend this “buy a bunch of cheap bras in a small range of sizes” method (from ebay, Bratabase, friends, online communities, etc) if you’ve changed sizes or are trying to determine your size – it’s cost effective and you get to try on a much greater variety of bras than you would if you had to buy new! I now have several bras that fit me (and quite a few to re-home!) and have learned a lot about how different brands and particular bras fit.

You might remember that I didn’t have the greatest luck the first time I tried Curvy Kate bras (especially since I was still trying to fit into 28GG’s). Armed with a better idea of my current starting size, here’s the Curvy Kate bras I tried out these most recent rounds: 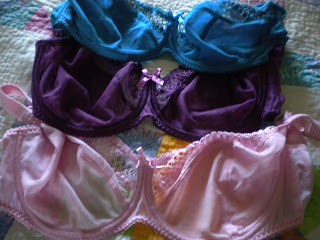 This bra isn’t perfect for me, but I LOVE the colors and feel of the fabric, so I think I’ll probably be keeping at least two of these anyway. The bands on both these sizes are too big/stretchy for me, but not unwearably so (they do ride up a bit in the back). The 28H cups are as little too small (the wire looks fine on the side, but I get a bit of overspill in the tops of the cup); however, the 28HH cups are too big – but in a “the wires stretch too far under the armpits” rather than a “wrinkly in the top part of the cups” kind of way. If only going up a cup size in this bra meant more “forward” space rather than wider wires! Oddly, the cups of the purple bra seem to be bigger/wider than the blue one, so I may keep the blue and not the purple (though I love the color!).
I don’t think I’ll go out of my way to buy this particular bra again since it doesn’t suit me that well, though I would recommend it to others – maybe it would suit someone who needs wider wires/a bit shallower cups. 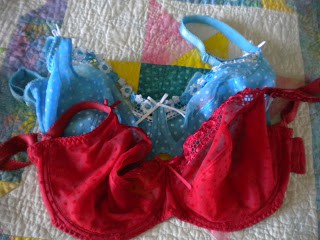 The Princess has seemed to be the best-fitting CK bra for me that I’ve tried so far. While the 28H is wearable, it’s small in the cup for me (the top cuts in). The 28HH is much better, although the wires are a little on the wide side and the top cuts in very slightly. I’d even look into trying out the 28J if I came across it – a good rule-of-thumb when trying on a bra style is to keep going up in cup size until it’s obviously too big. 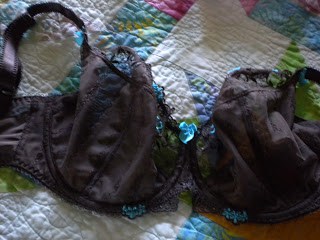 The band in the Emily was very tight for me (I had trouble getting it on, and tried it out with an extender as well), and even then I could tell that the cups were too large – but this time, in more of a “looseness in the front/top of the cups” rather than a too-wide wires way. I could deal with the tightness of the bra by wearing an extender until it loosened a bit, but the wrinkling in the cups makes this a bra I’ll probably forgo to keep. 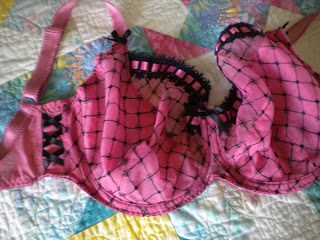 When I tried the Angel before in a 28GG, I felt that the cups were too small, but I really didn’t like the spread-out look I got (and it made it harder to tell what the true fit was for me). This 28HH bra, on the other hand, has been altered to have the center gore brought in, giving the bra a much better shape for me!
However, bringing the center gore in will often make the cups of a bra bigger/roomier, and the cups on this 28HH are thus too big for me. I’m definitely willing try this bra again in a 28H (or even a 28GG) with the gore brought in, though.
(I’m also interested in trying the Portia bra again – probably in a 28HH-J since the 28GG was so ridiculously small.)

There’s some “in general” principles and facts that can be taken from this (that the Emily runs larger in the cup than the Princess, for example, and the band of the CrissCross runs stretchy/large), but just because I found the bands tight or loose in some of these, or the wires wide, doesn’t mean that everyone else will for their particular body/breast shape.Bratabase is a great resource for checking out what other women have to say about the fit of different bras. For example, these entries have comparisons of lots of different Curvy Kate bras (for the same user). However, the only true way to tell if a bra will work for you is to try it on for yourself!

Have you found that you need to wear different sizes within the same brand (or even in different colors of the same bra)? How do you deal with a size change/figuring out your size if you can’t shop for bras in stores?