Today finally I got around (with the help of my mom and her sewing machine!) to modifying the band of the black 30GG Deco bra that I bought a few weeks ago. It’s really the first bra alteration I’ve done besides taking in a center gore, so I’m by no means an expert, but I found this really pretty simple. Here’s a quick rundown of what I did. 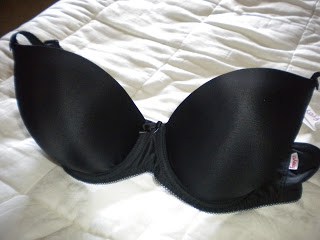 The method I used was Venusian Glow’s easy tutorial on Tightening a Bra Band. I used a ribbon for backing as suggested at the bottom of the post (and basically did the same thing as in her Bra Band Tightening Using Elastic post), as just simple stitching wasn’t going to give the tightness I wanted. Thankfully, since the unstretched measurement itself (26 inches) was a little less than what I wanted, I didn’t have to worry about taking off any actual length of the band: I just needed to provide a non-stretchable backing to the bra so it wouldn’t stretch to the full 32 inches. 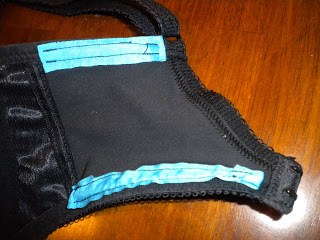 We stitched ribbon onto the elastic of the bra on both sides of the band, top and bottom (I left the panel right next to the cups alone, as I didn’t want the bra to end up too tight). 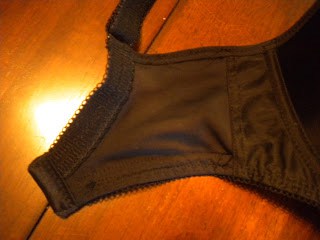 I didn’t have black ribbon, but I think the blue looks kinda snazzy… plus, it’s on the inside of the bra, so you can’t tell from the outside!

The end result is that the bra now stretches to just 28 inches. Much better! No cutting necessary, and I didn’t find that the cups got distorted.

However, this fairly quick fix doesn’t always make for a perfect bra. Before, the bra was much too loose on the tightest (3rd) hook. Now, the bra is quite tight enough on the middle (2nd) hook. This bra is now wearable for me (whereas before the band was so big that it wasn’t), but the issue of the center gore not sitting flush with my sternum was not corrected by tightening the band, even when I wear the bra on this now-tight middle setting. The center gore should always sit against the sternum in a well-fitting bra, but I’m not quite sure how to correct this; it may just be a shape issue?
In any case, the gore not sitting quite flush means that there is a little gaping in the top of the cups that is corrected when I hold the center gore against my sternum. Again, since I’m not sure this is correctable for this bra, I may just have to live with it!

Of course, the best thing to do is to buy a new bra that fits you perfectly. However, many of us aren’t able to do this as easily as others, or our particular shapes make it necessary to do “quick fixes” on even some bras that are the correct size, but have slight style issues.
Have you ever done alterations on a bra? What were your reasons?