If you know me, you know that I strongly loathe don’t really care for Victoria’s Secret. I’m of the opinion that it’s the devil they fit people poorly and offer a very limited range for a shop that’s specifically lingerie/bra oriented.

Is Vicky’s all bad? Dear readers, pretty much no! If you fit within their fairly limited range, you’ll be able to find bras there and sing kumbaya with all the other patrons. If not? You’ll either be made fun of (true story) or they’ll try to convince you that you fit into the size range that they carry (also true story).

I know my bra size (after years of wondering what the heck was wrong with me when I was 14 and didn’t fit into anything at department stores). If you’re not so lucky, though, and you go to Victoria’s Secret to get a fitting, chances are you’ll be put into a size that’s not ideal for you.

There are many methods used to figure out your bra size, but the best way I’ve come across is to measure under your bust and use that as your approximate band size, then measure your bust at its fullest point and use the difference as a starting point for your cup size. For example, if your underbust was 31″ and your bust 35″, you might start by trying a 32D and go from there. If the band is too large, try a 30DD (when you go down a band size, you need to go up a cup size to get an equivalent cup); if the cups are too big or band’s too small to hook on, try a 32C, etc. Bottom line, try things on until you get something that works and use the measurements only as a starting point.

At any rate, Victoria’s Secret doesn’t use this method to figure out your band and cup size. Instead of taking you to the back and properly measuring you as a starting point, they use the following method:
-Take above-the-bust measurement (around your body, under your armpits) over your clothes.
-Then measure your bust (again, over your clothes, often in the middle of the store).
-Then take the above-the-bust measurement and subtract that from the bust measurement to get a cup size (depending on the number of inches; 1 inch difference = A cup, 2 inch = B, etc).

I don’t doubt that this method yields at least somewhat satisfactory results for some. But for others, particularly the large-busted and/or thin, it is ridiculously inaccurate.

For an experiment (and because I was at a mall I knew I wouldn’t be coming back to anytime soon), I went into a Victoria’s Secret a few months ago to see what size they would fit me into, even though I knew they don’t carry my size in their stores. I was curious as to whether they would get an accurate size and whether they would refer me to another store.

(story time!)
When I asked to get fitted, the girl dutifully pulled out a measuring tape and told me to put my hands on my hips. She quickly whipped the tape around under my armpits (about 34 inches) and over my bust (about 37) as she asked me what size I was currently wearing. Then she proclaimed: “Okay, you’re a 34C.”
“34C.” I repeated, not sure she was serious and that she had heard what the current size I was wearing was.
“Yes, or possibly a D, since you have a smaller frame,” she said confidently.
Several questions were running through my mind, namely how I could magically fit into a size that I hadn’t been able to get into since I was 11, and on what planet a 34 band equaled a small frame. However, I played along and gathered a few 34D’s.
I buzzed her over to the fitting room after I’d somehow gotten one on, feeling ridiculous. “How are those fitting?” she asked, cheerily and automatically. I showed her how the band was riding way up and how the cups barely covered the very front of my boobs. The fit was so completely, ridiculously off that I wondered how she would salvage the fitting, much less keep a straight face.
“The cups are way too small,” I said helpfully.
“Hmm, how’s the band fitting?” she asked, buying time as she sidled around me.
I pulled it several inches away from my body so she could see how loose it was.
“Okay, well, maybe you’re a 32DD. Or maybe even a 32DDD,” she offered, it seemed to me seriously. “Since you have a small frame.” 32DDD is the smallest band/largest cup size they offer, and only in one or two bras usually only sold online. “What size did you say you were wearing currently again?”
When I repeated it, she said “Okay,” noncommittally. Then she left, still looking perplexed as to why her original fitting didn’t work and probably sure that I would fit into a 32DD (which, incidentally, has virtually the same cup volume as a 34D). 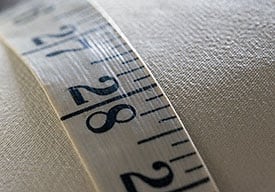 Why was the fitting so very far off? Had the fitter bothered to actually measure my underbust, from which the band size should be based off of, she would have discovered that it measures about 28.5 inches. That’s quite a far cry from the measurement she used to determine band size (34), and it’s about 9 inches different from my bust measurement as opposed to 3 inches. Using the same method of one inch per letter, these new measurements come much closer to my actual size. It’s not that difficult.

So why doesn’t Vicky’s use this method? I’m not completely sure. Most obviously, I would think it’s because they only carry a fairly limited range of bras (32-38 bands, A-DD cups; most of the 32’s come in only A-C and sometimes D). Their goal is to sell bras; I get it, they’re a business – it makes sense (to a point) that they would want to try to fit people into what they carry.

More importantly, though, I think for at least some fitters the method used is based on an ignorance of how bra sizes work and because they aren’t really aware of sizes beyond what they stock. I’ve known girls who’ve gone into the store asking for “odd” sizes like 30D and were told “That size doesn’t exist!” I’ve also heard about or experienced being told that you can’t possibly be the size you’re wearing, that Victoria’s Secret doesn’t sell “weird” sizes like that, that anything 34 and below is “tiny,” and that something is wrong with you if you aren’t the size the fitter tells you you are.

The perhaps even more prevalent method I’ve seen of adding 4-5 inches to the underbust measurement to get a band size seems to me an even more blatant attempt to get nearly everyone to fit into a relatively small range of bras. A girl with a 29 inch underbust and a 36 inch overbust would be fitted into a 34B or C with their standard math equation (29+5 = 34 band; 36bust-34band = 2 inch difference). A fitting estimate using her actual underbust measurement would put her into about a 30DD. Next time you go to a store see how many 34C’s you see in relation to 30DD’s. A girl that’s a 34C = lots of sales. A girl that wears a 30DD = no sales (at least for Vicky’s).

I’m sure many people have had good experiences with Victoria’s Secret. Sadly, I haven’t, and it bugs me to no end when I see girls getting fitted into sizes that are obviously wrong, especially if the girls are made to feel that it’s a problem with them, not the bra they’ve been given to try.

I may not be “normal.” But you know what? Neither are you. You have your own special and unique body that shouldn’t be defined and constrained by what measurements you have and what society tells you that normal is.
If you should be wearing a 30C, then you shouldn’t have it hammered into you that you have “tiny boobs” and must wear a 34A, because you’re tiny and tiny people wear A’s. You shouldn’t have to be told that your bra size doesn’t exist and you can’t possibly be a C. You shouldn’t be made fun of because you’re “so skinny” because a 34A is slipping off your shoulders because the band is too big.
If you really are a 34F, you shouldn’t be told that you’re a 36D because that’s all the store has. You shouldn’t be forced into bras that are too tiny and make you feel fat and ugly and ridiculous.
If you’re a 32H, you shouldn’t have to endure being the brunt of “big-boobs” jokes or told that you look like a porn star or endure horrible back pain because all that the salespeople can do is hand you a 38DD and tell you that you should get a breast reduction.
And you know what? If you wear a 34C and you fit everyone’s definition of “normal” and you can get bras at Victoria’s Secret, more power to you. Because you are you. And you are beautiful.