The Modesty Panel: Growing up in the Christian Homeschooling Subculture

This week, a group of bra bloggers – all of us with various viewpoints and backgrounds – are sharing our perspectives on the subject of modesty in the series The Modesty Panel. The topic of “modesty” is one of those interesting but tough to write about subjects, and one that the group of us all wanted to write about “someday”. Well, “someday” is this week! 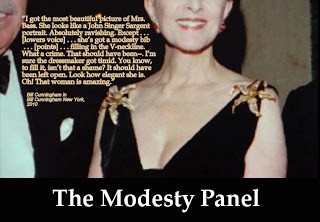 Be sure to check out the posts of the other participating bloggers (links will be updated as they’re posted):

My own particular background is not something that I’ve shared much about on my blog, but I feel it’s necessary to give some brief insight so my post has some context.

I was homeschooled growing up, and my family was a part of a larger homeschool community. The homeschooling community is made up of a wide variety of various groups with different beliefs, but Evangelical Christian, Fundamentalist, Quiverfull, and/or Patriarchal families* made up a large portion of the community that we interacted with. Though my own family was not necessarily or particularly part of one subset or another, I was heavily exposed to many of the teachings of these and various other subsets. One of the big topics/teachings/subjects in the community I was part of – especially as I was in my teenage years – was that of Modesty (I capitalize it purposefully in this post). There were reams of books and articles written and talks given on the subject, as well as on related topics like Purity and Dating/Courtship.

Embarrassed, I crossed my arms over my breasts, hoping to hide them. Despite the fact that I was wearing a ugly, minimizing sports bra under my shirt and had tried to dress Modestly, I felt somehow “immodest” and exposed as the group of girls, boasting waist-length hair, long-sleeved button-down shirts, and ankle-length skirts, passed by. Did my split-ends, jeans, and t-shirt somehow make me less spiritual than they, these daughters of the leaders in the community?

The carefully-approved Summer camps and gatherings that I was allowed to go to featured long lists (sometimes pages) of what “approved attire” for the attending youth was. The vast majority of the items applied to females. There was an array of gymnastics and self-criticism for us to perform before an item of clothing could be deemed Modest that bordered on the ridiculous:  Raise your arms! Does a hint of midriff show? Immodest! Stretch your arms to your side – does your middle finger go past the bottom of your shorts? Immodest! Bend forward – does any hint of cleavage or part of your back show? Immodest! Crouch down – does your back show? Immodest! Does “too much of your female form” show, distracting from your face? Immodest! Wearing too much makeup? Immodest! Spaghetti straps/tank tops? Immodest!

Periodically, I would read recommended articles that urged girls to “examine their hearts and motives” for what they were wearing, and to purge their closets of anything that might “cause your brothers to stumble”. I wasn’t allowed to own anything like tank-tops or short-shorts, but I anxiously mulled over my t-shirts and jeans. Were they, perhaps, too tight? They were certainly not tighter than what “everyone else” wore… but, as was pointed out to me, “everyone else” didn’t have a chest that needed to be minimized. My pants were mostly baggy thrift-store jeans, but I wondered if I would be seen as more “feminine” and godly if I switched to wearing skirts.

When I was in high school, a popular site among homeschooled-teens launched the Modesty Survey. In a nutshell, this was a survey that asked boys and men to rate a list of certain statements, such as “Jeans are immodest”, from “Strongly disagree” to “Strongly agree”. Many of the teenage boys I knew took this survey. Upon reading it, we girls would be able to take our cues as to what we should and should not wear, do, or say (this post goes into more detail on the Modesty Survey)! Finally, I thought, this will give us insight into what not to wear in order to Not Tempt Men and Cause Them to Stumble!

And then I read that, apparently, it was Immodest to leave your jacket partially unzipped, fix your bra strap if it slipped, wear shorts that are shorter than “mid thigh” or skirts that come above the knee, stand a certain way, stretch, or bend over. It dawned on me later that the survey was basically asking a horde of horny male teenagers (along with, creepily, a handful of men aged 40+) about what turned them on (Spoiler alert: everything), and then telling the teenage girls that it was all their fault for the way they dressed (not to mention the admonition that girls who were “more attractive” or “curvy” needed to be the Most Modest of All). That’s… pretty useless.

Another, perhaps more sinister way of thinking illustrated in this survey and throughout the Modesty Culture was the common thought that women who don’t dress Modestly are not deserving of respect. I saw and heard references to this in many forms constantly throughout my 12 years of being part of the homeschool subculture. The belief that men had the final say in what women should or should not wear. References to pointing out and shaming women who were “dressed immodestly” or “calling unwanted attention to themselves”. The thought that “women who dressed immodestly must have a low self-image”. The teaching that females were “defrauding” men by dressing in such a way that men deemed immodest. As a teen, I was terrified lest I be put into one of these categories – and become an object of righteous ridicule and shame.

So, what’s my point in sharing all of this background? All these teachings of Modesty did little but infuse guilt, shame, and self-doubt into my life. No matter how hard I tried, I felt I was never going to be as Modest as the girls who always wore ankle-length skirts. I would never be as Feminine as the women who never cut their hair. I would never be as Pure as the girls who were better able to conceal their figures. I believe that part of the depression, self-hatred, and body image issues that I experienced during that time stemmed from the warped sense I had of my body due to the teachings imposed by the Modesty Doctrine (Patheos author Sierra has a very relevant and thought-provoking article on the subject).

This blog, and interacting with the blogging community as a whole, has, in a big way, been a healing journey for me. I can talk about the issues that I once was so ashamed of, and not fear being shamed and shut down. I can delight in the fact that I’ve found clothes that fit and flatter me, and not be ashamed that they do so. I can wear my hair short and be proud of it. I can recognize and celebrate, with freedom, that ALL body types are great and beautiful and don’t have to be hidden away, minimized, or told they’re wrong.

What’s my personal view on modesty (uncapitalized) today? Honestly, it’s something I try not to think about too much. I’m one of those types of people that tend to way overthink things, and I don’t think the way that people dress is one of those subjects that deserves a huge amount of debate and thought and time devoted to it – not for me, not any more. Stated in simple fashion, I figure that as long as I’m being reasonably respectful of others in the way I dress (and this can mean different things for different situations and cultures), and as long as I’m seeking to have my heart right with God, I’m being modest.

What are your thoughts on modesty (or Modesty)? How has your background affected your views today?